The HDF5 library has supported the I/O requirements of HPC codes at Lawrence Livermore National Labs (LLNL) since the late 90’s. In particular, HDF5 used in the Multiple Independent File (MIF) parallel I/O paradigm has supported LLNL code’s scalable I/O requirements and has recently been gainfully used at scales as large as 1,000,000 parallel tasks.

What is the MIF Parallel I/O Paradigm?

In the MIF paradigm, a computational object (an array, a mesh, etc.) is decomposed into pieces and distributed, perhaps unevenly, over parallel tasks. For I/O, the tasks are organized into groups and each group writes one file using round-robin exclusive access for the tasks in the group. Writes within groups are serialized but writes across groups are concurrent, each occurring independently to a different file. 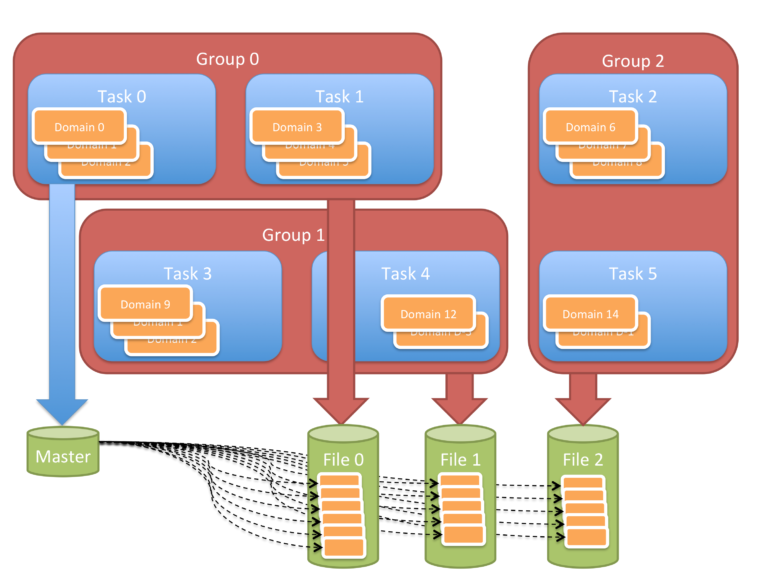 In the example in the diagram, the computational object is decomposed into 16 pieces, called domains, distributed among 6 tasks. Some tasks have 3 domains and some have 2. Tasks are formed into 3 groups each group producing one file. Finally, a small “master” file is written to capture information on how all the pieces are distributed among the files.

In MIF, the number of files (or, equivalently, the number of groups) determines the amount of concurrency. Two extremes are worth elaborating. Setting the number of files equal to the number of parallel tasks results in file-per-processor I/O. This may result in an unwieldy number of files but is ideally suited to certain recently proposed HPC platforms with local persistent storage (e.g. “burst buffers”). Setting number of files to 1 effectively serializes I/O. This is unacceptable at even slightly above small scale but is often convenient for tiny scale. Ideally, the number is chosen to match the number of independent data pathways between the nodes of the running application and the file system; too large and contention for resources slows performance; too small and resources are under utilized. There is an optimal file count for maximum performance as the data from a 1999 study below shows. In practice, file count is chosen heuristically by the user approximately logarithmically proportional to task count. For example, at O(106) scale, maybe 4096 files are optimal. 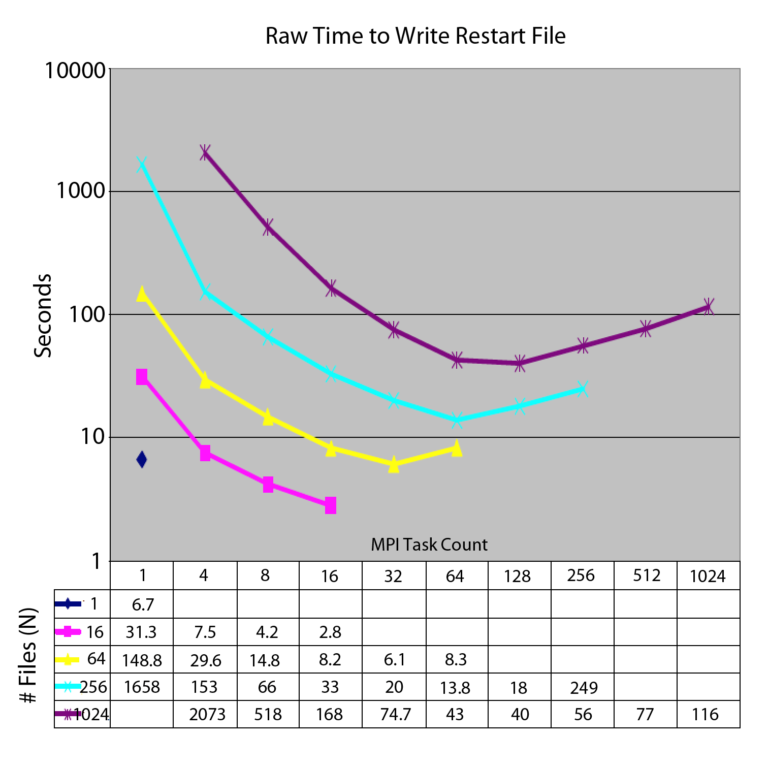 Figure 1: Time to write a restart file from Ale3d as a function of MPI Task count and MIF file count (circa 1999)

Support for MIF in HDF5

Among its many attractions, more of which are detailed later in this article, the MIF paradigm works even for serial I/O libraries and involves an extremely easy-to-use parallel programming model. In particular, the HDF5 library includes a number of features, already available and/or nearing completion, that facilitate or help to optimize MIF.

Probably the most important among these is HDF5’s group abstraction which supports a hierarchical namespace for objects in a file. This is essential to MIF because it allows each task to write identically named pieces of some larger decomposed object in separate groups in the same file without name collisions. In addition, the ability of HDF5 to do recursive object copies of whole groups makes it easy to migrate individual task outputs from the MIF paradigm between and within files.

Next, the implementation of HDF5’s metadata cache  is such that only the portion of the object namespace visited by an application is loaded into memory. This is critical to ensuring an upper bound on memory footprint and consistent file open and close performance as the number of objects in a file grows. Recently, LLNL funded The HDF Group’s work to improve memory footprint of the metadata cache and to optimize and simplify metadata cache configuration for MIF and other HPC use cases.

HDF5’s external links and soft links combined with file mounts also facilitate MIF. Either of these choices enables a data producer to create a master file that appears to a consumer as though all the objects in all the other files virtually reside within the master. Consumers need not be burdened with the fact that data is actually scattered across many files. Nonetheless, consumers are still exposed to the fact that an aggregate data object, like a parallel decomposed array, is actually a collection of object pieces in HDF5.

However, a recent addition to HDF5, virtual datasets, addresses even this issue by capturing information about how individual HDF5 datasets are knitted together to form a single, coherent whole dataset. For example, there could be 1024 different datasets each representing a 10242 slice of a 10243 volume scattered about 32 files. A single virtual dataset in the master file would enable consumers to only ever see and interact with it as a 3D, 10243 dataset. With virtual datasets, consumers need not even be aware of the fact that the object is decomposed into pieces let alone that those pieces reside in different files.

The core virtual file driver (VFD), which is essentially a ram-disk, is another feature of HDF5 that often facilitates a specific kind of MIF, file-per-processor or N:N. When a data producer has sufficient memory, HDF5’s core VFD permits it to aggregate all I/O activity into a single, behemoth whole-file I/O request occurring during file open and close operations. Once opened, all HDF5 calls made by the application wind up interacting with the file in memory like a ram-disk. The whole file is read or written to the file system in a single I/O request.

In addition, in 2013 LLNL funded an enhancement to the core VFD to support file images. An application can either deliver or acquire a raw buffer of bytes to/from HDF5 to treat as a file. File images facilitate MIF by enabling an application to, for example, open a master file for reading on one task and then broadcast it to other tasks which in turn open and read the buffer instead of requiring each task to hammer the file system to read the master file.

Finally, LLNL has funded and work was recently completed on two additional features in HDF5 to facilitate MIF. These are the page buffering and metadata aggregation features. Page buffering is designed to enforce all I/O operations occur in application specified page sizes and alignments and to maintain in memory no more than an application specified number of cached pages of the file. Page buffering is absolutely critical to ensuring I/O performance on newer HPC platforms where I/O nodes are fewer, fatter and optimized for larger, page-oriented (>=1Mb) transfers. The metadata aggregation feature is designed to collect HDF5 metadata together in large blocks and to reduce co-mingling of HDF5 metadata with application raw data in the file address space. Page buffering ensures I/O requests emitted by HDF5 can be tuned to underlying hardware and file system architectural parameters. Metadata aggregation ensures that metadata I/O is large and frequently accessed metadata is kept together. Combined, page buffering and metadata aggregation will improve performance of any HPC parallel I/O paradigm and certain aspects of the MIF paradigm (namely file handoffs between tasks within a group) in particular. 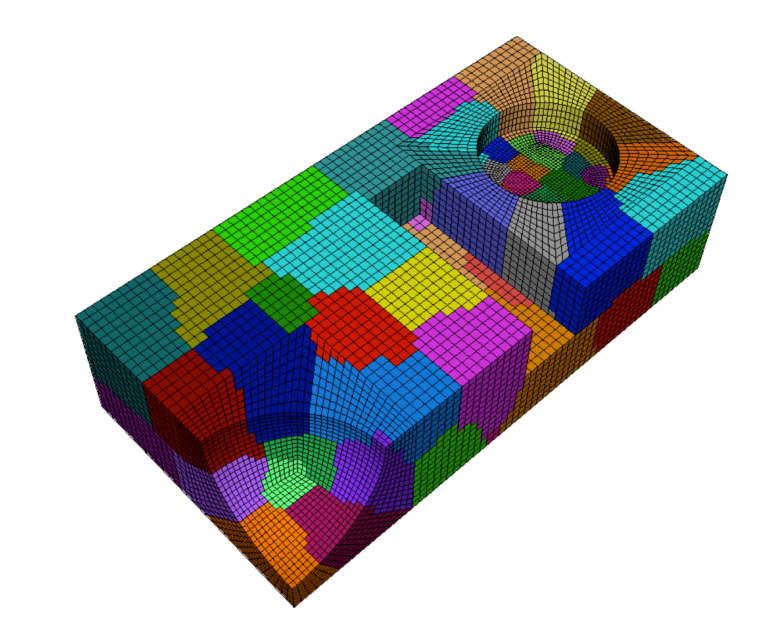 Figure 2 An unstructured mesh decomposed into pieces for parallel computation.

We’ll start with the cons.

Before we move to all of the pros of MIF, lets refute some of these cons.

MIF Cons Are Not All Bad

We have described the MIF Parallel I/O paradigm and described a number of HDF5 features that facilitate MIF. We have also shown that the advantages of MIF far outweigh any shortcomings. In addition, we have shown that several shortcomings are either non-issues or easily mitigated.

To the author’s knowledge, the MIF parallel I/O paradigm was first implemented using Silo in the late 1990’s by Rob Neely, then the lead software architect for the Ale3d simulation code. Since its resounding success there, and because of its easy-to-use parallel I/O programming model, the same approach has been adopted and used by a majority of LLNL flagship simulation codes as well as codes developed elsewhere within the scientific computing community.

This work was performed under the auspices of the U.S. Department of Energy by Lawrence Livermore National Laboratory under Contract DE-AC52-07NA27344. This article is identified by release number LLNL-JRNL-698378.

Editors Note:  Mark M. Miller (LLNL) – Mark’s early support was essential in the development of HDF5. He contributed technically through his co-authorship of AIO, the LLNL I/O library adopted by NCSA as the prototype basis of HDF5, and also by a never-ending stream of ideas.  Thank you, Mark!