I first heard of HDF during the “Data Format Wars” of the 1990’s. These “battles” centered on the selection of a format for the emerging NASA Earth Observing System archives, and there were a number of contenders. HDF won that battle in the end because of the inherent flexibility of the format and the tools for reading and writing it.

Now, twenty years later, HDF has emerged as the foundation format for an incredibly diverse and growing selection of scientific and commercial disciplines.

Is it the inherent flexibility of the format that has led to this success? Maybe, but I would pick information integration as the killer HDF feature.

“A strong foundation is being built for sharing data and information to create community knowledge and wisdom. This foundation includes HDF5 as the data layer with community conventions and ISO metadata facilitating use and understanding.”

We have experienced so many monumental technological shifts during the last several decades that, like the diurnal cycle of light and dark, the technology life cycle (shown below) is becoming instinctual.

It starts with a new idea, (usually aimed at new customers), that destroys existing organizational expertise and threatens the continued existence of established processes and organizations. These disruptions raise a variety of difficult questions and initiate an Era of Ferment during which established enterprises gauge the impact of the disruption in their worlds and try to adjust. The ferment creates uncertainty, high risk, considerable wasted resources, and no interoperability. 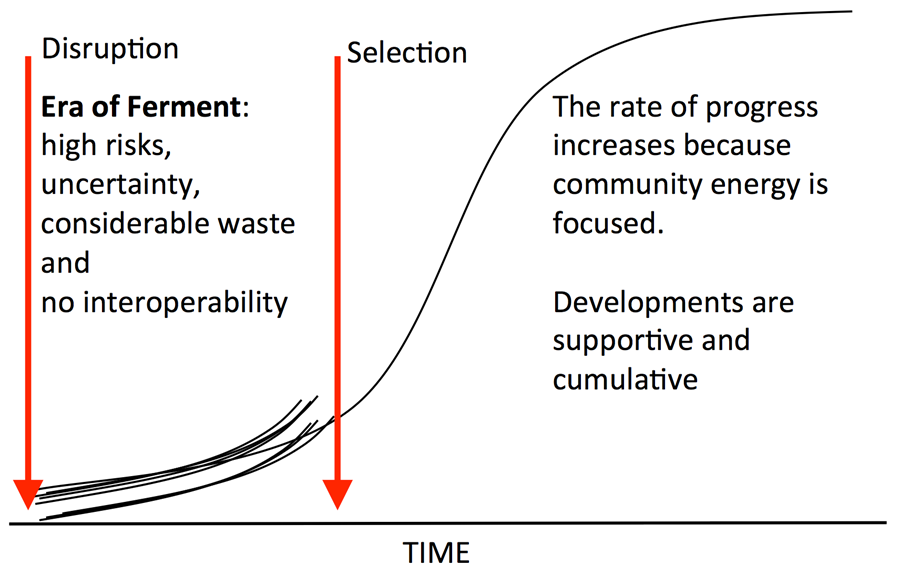 HDF Group is hosting a one-day workshop at the upcoming Federation for Earth Science Information Partners (ESIP) Summer Meeting in Asilomar, CA on July 14th. Please join us to learn about new HDF tools, projects and perspectives. There will also be an HDF Town Hall meeting on Wednesday afternoon July 15th...

Get your Bearings with HDF Compass

John Readey, The HDF Group   We’ve recently announced a new viewer application for HDF5 files: HDF Compass. In this blog post we’ll explore the motivations for providing this tool, review its features, and speculate a bit about future direction for Compass. HDF Compass is a desktop viewer application for HDF5 and other file formats. A free and open source software product, it runs on Mac OS X, Windows, and Linux.   Compass was initially developed by Andrew Collette, a Research Scientist with IMPACT (Institute for Modeling Plasma, Atmospheres and Cosmic Dust).  He has decided to work with The HDF Group to further the development of Compass. Andrew has written a very interesting blog that goes into some of the background of Compass and...

Letter to the HDF User Community

Lindsay Powers - The HDF Group The HDF Group provides free, open-source software that is widely used in government, academia and industry. The goal of The HDF Group is to ensure the sustainable development of HDF (Hierarchical Data Format) technologies and the ongoing accessibility of HDF-stored data because users and organizations have mission-critical systems and archives relying on these technologies. These users and organizations are a critical element of the HDF community and an important source of new and innovative uses of, and sustainability for, the HDF platforms, libraries and tools. We want to create a sustainability model for the open access platforms and libraries that can serve these diverse communities in the future use and preservation of their data. As a...

Before the recent release of our PyHexad Excel add-in for HDF5[1], the title might have sounded like the slogan of a global coffee and baked goods chain. That was then. Today, it is an expression of hope for the spreadsheet users who run this country and who either felt neglected by the HDF5 community or who might suffer from a medical condition known as data-bulging workbook stress disorder. In this article, I would like to give you a quick overview of the novel PyHexad therapy and invite you to get involved (after consulting with your doctor).

To access the data in HDF5 files from Excel is a frontrunner among the all-time TOP 10 most frequently asked for features. A spreadsheet tool might be a convenient window into, and user interface for, certain data stored in HDF5 files. Such a tool could help overcome Excel storage and performance limitations, and allow data to be freely “shuttled” between worksheets and HDF5 data containers. PyHexad ([4],[5],[6],[7]) is an attempt to further explore this concept.